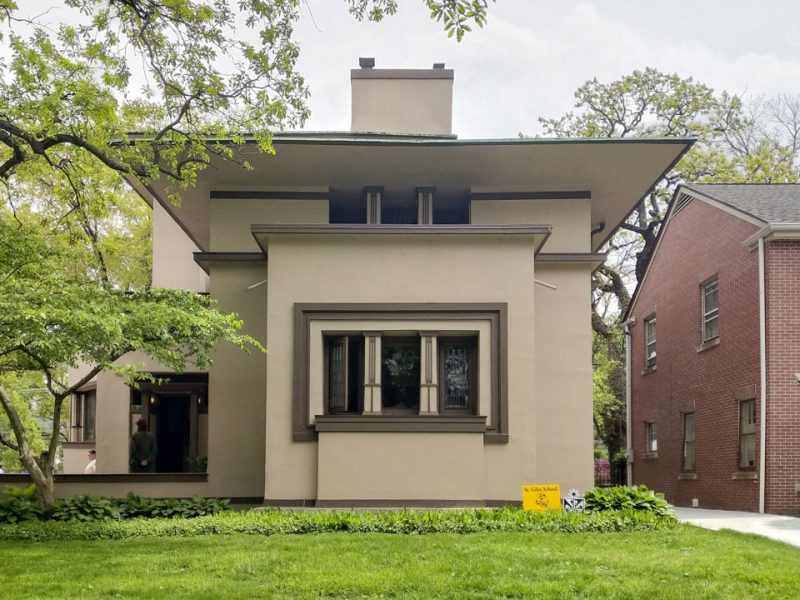 The 2019 Wright Plus House walked featured some great homes. I was glad to visit a few houses that fit nicely into my own interests in Wright’s early works. The 2019 crowds seemed lighter than past years even with the nice weather. Arriving a little later than usual, I started my day around 10:30. The longest wait time I had was about 45 minutes. That was a pleasant surprise. I wonder if the late start time had something to do with our short wait times.

My objective during this year’s walk was to check out kitchens. I’ve been thinking about updating or changing the kitchen in my own Victorian home. I absolutely love the design of my current kitchen in terms of aesthetics. It’s almost like walking back in time to the 1890s, but at the same time, it stinks. I’ve got limited counter space, a strange layout for modern needs, and no good place for a microwave. I was hoping I could steal some ideas from others that have older homes that surely faced a similar challenge to me. 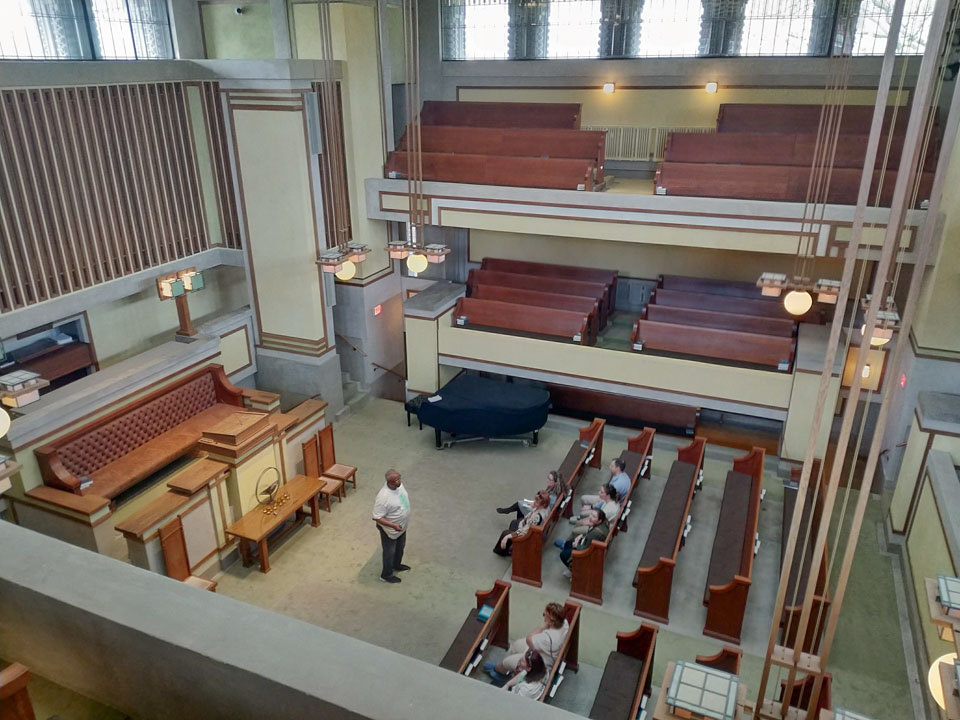 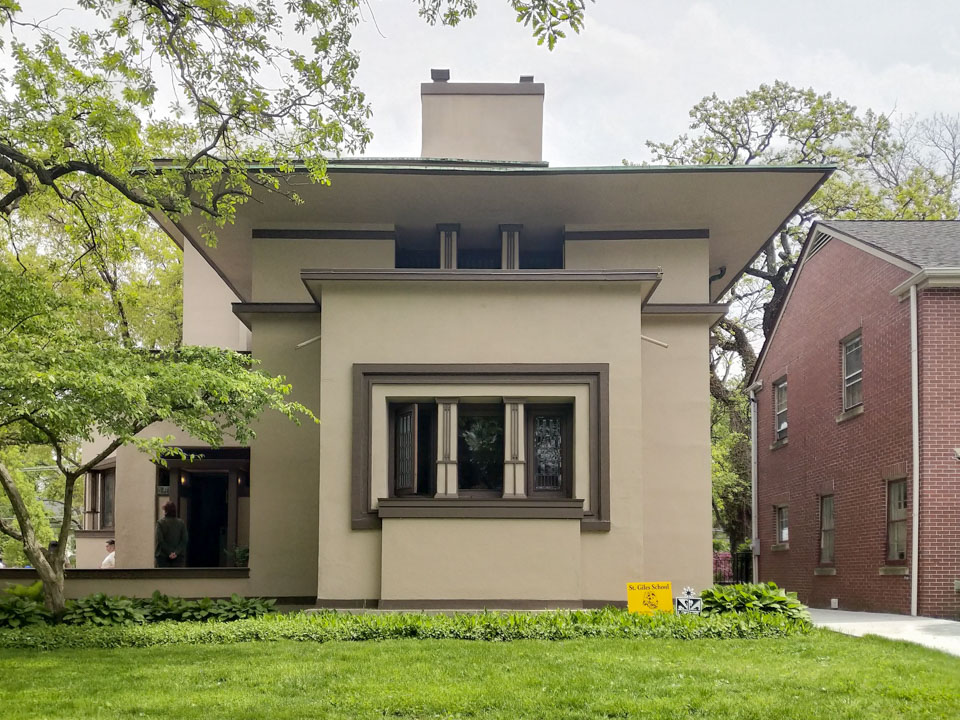 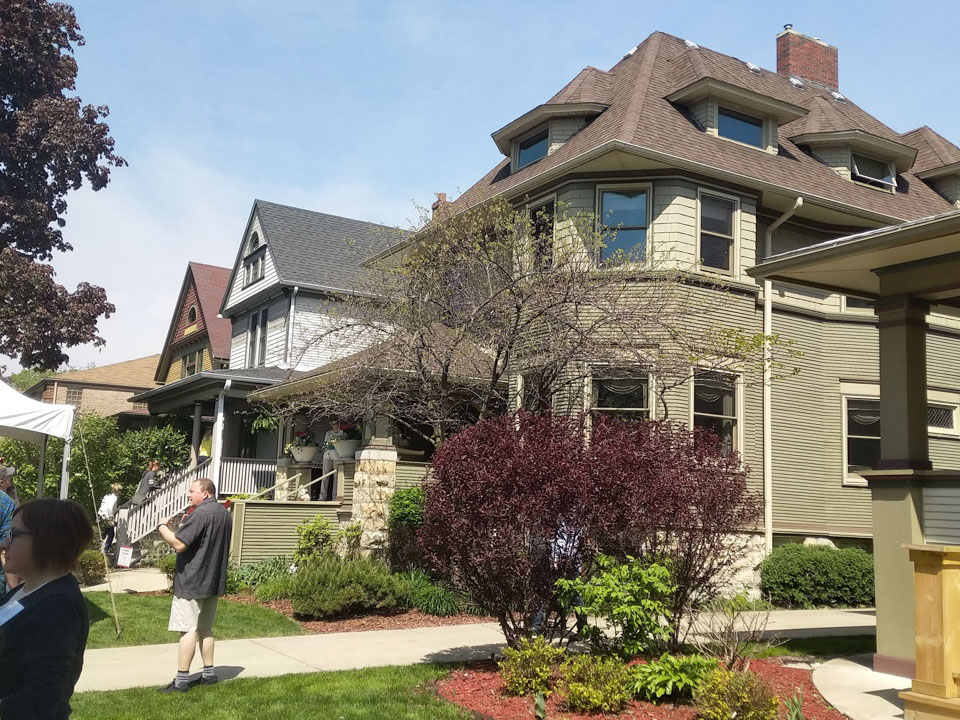 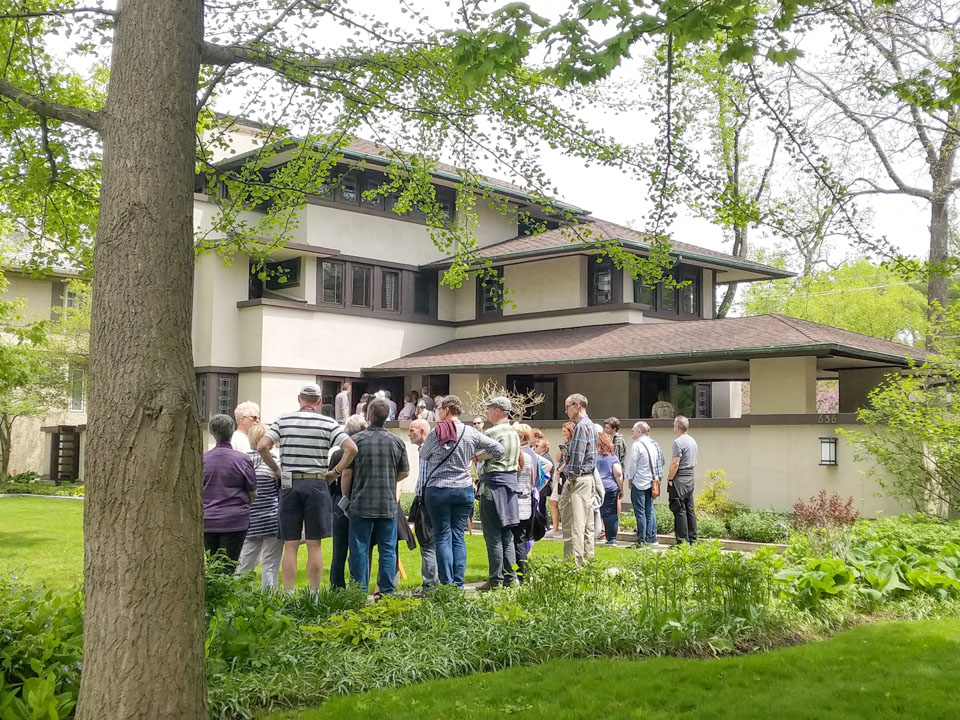 This home was one of Wright’s early works and was a mash-up of a Queen Anne style that featured a fairly open first-floor plan. The Woolley house features a first-floor plan that is not far off from the American four square design.

The floor plan is surprisingly similar to to the Thomas Gale house (1892), Emmond house (1892) and the Robert Parker House (1893). The Wooley house borrows the eight-sided reception room design element from the Thomas Gale, Emmond, and Parker houses.  Seeing the house in person, I almost felt like Wright was constrained by designs that were popular at the time.  At the same time, Wright is still trying to inject a few of the radical beginnings of his very geometric design elements.

The interior of the Woolley house was remodeled in a fashion is sympathetic to classic Wright elements.  Designs that included oak, and in one case a custom lighting fixture in the dining room that evokes the dining room light in Wright’s Oak Park Studio. While I liked what the remodel was trying to achieve it had some shortcomings.  I personally felt the trim color and oak staining was more in line with tones popular in the late 20th century, rather than the late 19th century.

Wright homes that have undergone significant remodeling all seem to struggle with kitchen designs. I can imagine architects, kitchen designers, and homeowners struggling with determining how to best update a kitchen. Kitchens in a Wright home beg to be functional, while at the same time not being to0 out of place. The remodeled Kitchen in this home while not nearly done in a classic style, was done in a modern style that somehow worked.

The center island included one of the currently popular hanging mason jar type chandeliers with low wattage replica antique bulbs that I normally would have never guessed would have looked good in such a home, but it did. The island included seating and would be a great place to eat a quick breakfast or chat with the chef of the day.

The kitchen also featured a tile backsplash that nodded to Wright’s tulip window design. The tulip backsplash tied in with custom tulip design stained glass windows that were created for the rear porch. I’ve restored a few leaded glass windows myself.  Knowing the cost, I’m sure the Woolley porch was a costly endeavor.

The kitchen also features a nice exit to the rear deck. Summer entertaining would be a breeze.

The William G. Fricke house is unmistakable. While it’s three stories high, the horizontal elements are classic prairie style. If you are a fan of Wright’s prairie style period this is a great introduction.

The entrance to the home is extremely interesting. A docent on the tour explained that the winding entrance was likely inspired by a Japanese Shinto shrine. As you enter, you walk into what amounts to a small external three-sided room that leads to the front door. It almost feels like you are standing in a closet while facing the front door of the home. The area feels both inside and outside at the same time. Walking through the front door gave me that classic feeling of many of Wrights designs. A sense of walking through a small space, and then expanding into a larger open floor plan at the heart of the home.

The ground floor included a kitchen, a living room with a fireplace, a dining room,  and a small breakfast nook. The entire floor is of course adorned with oak trim. The most photogenic element of the ground floor is the small reception or waiting area accentuated with the boat’s prow shaped window on the north elevation. A porch to the west of the kitchen has more recently been converted into an enclosed area with hinged windows that can be opened accordion style to get a full sense of the outdoors in good weather. I thought this conversion was done tastefully. The windows add a nice open eating area suited to modern tastes.

The kitchen was also recently remodeled, but I have to say I did not like the design choices. The cabinetry reminded me of some of the strange “modern” designs I have seen in Europe. the wood tones were on the red side compared to the wood in the rest of the house. I don’t feel the elements blended well with the rest of the home. That’s just one man’s opinion of course.

Due to the size and nature of the floor layout, while there was an island in the middle, it felt a little like a galley kitchen. Longer, and narrow. This was probably accentuated by the fact that we had a large tour group.

I did like that the kitchen had a lot of light.  The windows themselves are about a half story above street level. This was one of Wright’s design tricks. This trick allows for you to enjoy the view out, without your neighbors walking down the street staring you in the eyes.

The William E. Martin house is another prairie style home featuring long horizontal lines, oak trim, and all the classic Wright inspired design elements. I love the first-floor floor plan. Walking in you turn a sharp corner, take about four steps and are almost deposited into the center of the home. You have immediate access to the living room, dining room, and a den. Even though all the rooms are within a step or two of a central hallway, they all still feel separated by the fact that all the entrances to the spaces seem to be slightly off center.

The living room has a unique fireplace made of long elongated bricks that Wright traditionally used in this period. I’m not sure if these were his roman bricks or something very similar. Next to the fireplace is an abbreviated inglenook bench. I say this because it was not the traditional two bench design, but rather an L shaped bench only on the right side of the fireplace. This would make a great corner to settle into with a book during a dark winter evening.

The porch really hit me. Walking out onto the long porch covered by a cantilevered roof, I realized how far ahead of his time Wright was in his use of outdoor space. The porch on the William E. Martin house reminds me of so many of the now trendy outdoor living spaces that are popping up in upper-class neighborhoods. The types of vast expansive porches that seem to incorporate a fireplace, open sides, wicker couches, and often an outdoor fireplace.

The remodeled and updated kitchen in the Martin house is one of the best designs I’ve seen. Not because it is big, but rather because it maintains the original proportions.  At the same time it includes modern updates required in today’s world. During the remodel, the original window locations were maintained. An island was added in the middle of the room to provide more storage. The island has legs finished in deep oak that closely resemble the trim and finish of the other oak accents in the house. This small detail, made the feature feel like it was meant to be there and not a forced addition. The dark countertops are also a nice touch and kept with the design aesthetic.

The hardware on the cabinets fit in well, and even the more modern refrigerator somehow wasn’t sticking out like a sore thumb.

I’ve always had a hard time envisioning an island in my own home because I never thought it would fit in. After seeing how the kitchen was handled in the Martin house, I have the confidence, that if done correctly, I could get an island in my own kitchen.

My visit to the Unity Temple this year was more about checking out the recent restoration work completed in 2017. The last time I had been in the Temple was just before it was closed for the restoration and I was keen to see the refresh.

The exterior looked stunning and clean. The interior colors, while still muted in what I’ll call earth tones, were more vibrant than they were previously. The art glass panels in the ceiling of the sanctuary were clean and brilliant.

If you haven’t had a chance to visit the Unity Temple and you are in the area for any reason it is a must see Wright design. The unique nature and layout of the sanctuary is like no other religious gathering space I’ve ever visited. Thanks to the unique balcony designs you are always within earshot of the pulpit no matter where you are seated.